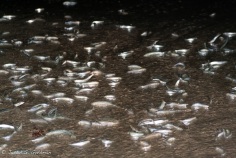 If it’s March, it’s grunion time up and down the Southern California coastline. What are grunion? To put it bluntly, they are rather weird-looking silvery fish that swim ashore to spawn. It’s a big deal here in SoCal. To watch this romance blossom, you’ll have to set aside an evening somewhere between March and August and pick a beach anywhere from Malibu to Crystal Cove, or San Pedro to La Jolla. The sandier the beach, the better. Grunion don’t like gravel. Make sure it’s high tide because these little critters bring their sexy bods on shore by the thousands and wriggle around until the female settles down into the sand, tail first to lay her eggs. The males swagger over to curl themselves around the females and release milt that fertilizes the eggs. The afterglow doesn’t last very long, (long enough for the eggs to incubate though) before the grunion rely on the waves to carry them back out to sea where they swim off and have lots of little grunion. According to the experts at the Birch Aquarium grunion runs are triggered by high tides during new and full moon phases, every spring and summer.

If you go to watch, don’t wreck the mood, observe from a distance and let nature take its course. During April and May the grunion runs are closed, meaning its okay to watch but no catching. June through August it’s okay to catch with your hands but you are not permitted to use a scooping device. Don’t forget you’ll need a license if you intend to take away any catch at all. 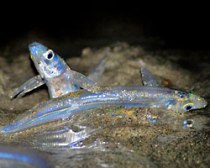 A side note:  Halibut is especially plentiful during these months and a lot more tasty than grunion. IMO. If you want more info on best guesses as to when the grunion are at peak, check the Ca.gov website. Remember these dates and times aren’t carved in stone, so don’t expect these marine critters to perform on demand.