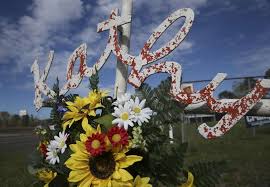 was strangled in 1991.  Nothing got done about it. No one arrested. No one locked up. No one convicted. Sound familiar?

through the small town of Vidor, 100 miles east of Houston, is the inspiration for the Oscar-winning film, Three Billboards Outside Ebbing, Missouri. Martin McDonagh spotted Fulton’s billboards from the window of a bus on a ride through Texas. That was two decades ago, and yet, the pain in those messages calling out the police, triggered a gut-reaction for the playwright that stayed with him long after the road trip ended. 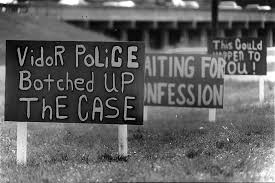 But for James Fulton this is real life. His pain. His loss.  His daughter was murdered and justice has evaded him ever since. It’s true, art often imitates life. But James Fulton doesn’t much care about Oscars or Hollywood. All he wants, after all this time, is his daughter’s killer brought to light. Mr. Fulton is 87 but refuses to give up hope that somewhere in Vidor justice will prevail. Who could blame him? If it were your loved one who’d been murdered, giving up wouldn’t be an option.

James Fulton, the real-life character trying to keep his daughter’s case from fading away. Read the full story at the Houston Chronicle.